skip to main | skip to sidebar

What's all this fuss about?

Latin lyrics in Heavy Metal music are a common phenomenon. The darker the music, the more evil the band wanna be. What's better than using an old, mysterious, hardly understandable, cryptic, medieval and therefore almost satanic language? Unfortunately bands seldom know how to use this language properly. So, instead of evoking the demons of the realm of evil, they just evoke a hop-frog. Clatu verata nicto! - The most of you know what happened after this wrongly spoken spell.

Normally, two questions are the result of the fact that you've just read a latin phrase:
- What does it mean? (almost everybody)
- Is it correct? (just a few latin aficionados)

This page doesn't want to make fun of mistakes in latin lyrics. I wanna answer the first question to everybody who is interested. The second question is just for myself or for the two or three weird guys out there or for bands which are thinking about using a latin phrase as well. You can contact me if you want. 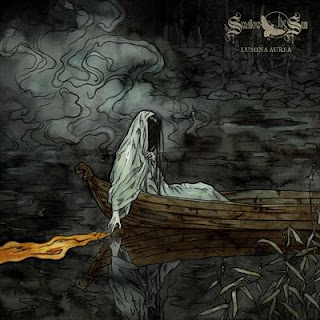 As you surely know, this EP contains a single song in which guitarist and band leader Juha Raivio comes to terms with the death of his girlfriend. She died of cancer in 2016. It's therefore a very dark and ambient track. Latin Gregorian chants and latin lyrics - spoken and sung by Marco Benevento (The Foreshadowing) - play an important role.

The song reminds me of old myths in which dead bodies can/ has to cross a river in order to reach the underworld or the promised land. In ancient Greece mythology this river was called Styx, the ferryman's name was Charon and the underworld was called Hades). But there are other legends as well, I think the great CD "Saivo" by Tenhi deals with this topic as well. The cover also shows a boat and mysterious figures.

*** edit ***
Recently, I've got some help from a cool guy who sent me the lyrics (as you can see in the comment section). So let's see what I've got and let's fill the gaps:


Lumina aurea - golden lights ("lumen" is not only "light", but also the ability to see and the energy/light that shines as long as you live)

in abysso lacrimarum acrium- in the abyss of bitter tears
saxum iacet illic - a stone lies there.

[2:40]
unde tenebrae numquam possunt excedere - from where darkness never can leave
nec iam lux penetrat. - and no light never penetrates.
omniaque requiro - (not sure) and I ask for/ demand everything
in me imprimuntur - (not sure) in me they are imprinted/ engraved
sidus argenteum matutini - the silver star of the morning
omnia in me signata sunt - everything in me is sealed

[3:30]
Ferte mihi capita daemonum omnium - Bring me the heads of all the demons,
Quae feram ubi vere tenebris sunt- which I'll carry where really darkness is.
vos non timeo, - I'm not afraid of you,
nam vos iam persaepe vidi - for I have very often seen you

ac vos nihil eratis ad alam nigram et cor album -  and you've been nothing to the black wing and the white heart -
(this construction I don't understand. If "eratis - you were, you've been" is correct, then the direction "ad alam - to(wards) the wing" doesn't fit well; if "erratis - you err, you've erred" is correct, then "nihil - nothing" doesn't fit well)

te procul ab pseudoprophetis - You, far away from false prophets
quorum verba cava sunt - whose words are inane
per cor meum per has portas nocte - through my heart, through these doors in the night
portavi te donec lacerti vacui -You I've carried
donec lacerti vacui te requisiverunt - until the empty muscles required you (?)

[5:22]
de nebulis in terram cecidimus - Out of the fog we fell to earth.
abiecti longe Eva atque homo - Eve and the Man (are) put down far away
de illis spei turribus ardentibus - from there burning towers of hope
qui portus erant usque ad spiritum extremum - which were the harbours until my last breath.

[8:10]
Te per illud flumen nigrum secutus sum - Through this black river I followed you
Quod fluit usque ad fines terrae - which flows to the end of the world
Sulcos aquae aureos sequens - following the golden furrows of water,
Qui e primis digitis tuis effundunt. - which rise from your finger tips.

[10:07]
canite mihi, daemones - Sing for me, deamons,
nam vos non timeo. - because I don't fear you.
Gladios vestros cepi - I grabbed your swords
et vos mihi submittitis et luci eius - and you bowed to my will and to her light.
Etiam redis ad meos amores, sidus aureum - Also you, silver star, return to my love

[11:10]
Armor, deorsum per flumen - The weapon, going down through the river,
ita puncto tempore - so at one moment,
ut lux pulchritudinis tuae - like the light of your beauty
domum tristem illuminat. - illuminates the sad house.
Iam lacerti vacui mei te requirunt, - My empty muscles already require you,
donec iterum conveniemus - until we'll meet again
in insulam, meus amor, in insulam - to the island, my love, to the island.

Interim ut Eva et homo longe abicierum - Meanwhile, like Eve and the man, put down far away (the form "abicierum" isn't a correct one)
in itinerem aureum te sequor, meus amor - on the golden way I follow you, my love,
in itinerem aurem per aquas nigras - on the golden way through black waters
vectus imagine illarum avium noctivagarum - driven by the image of those night birds
in itinerem aurem, meus amor. - on the golden way, my love.
(last comment on the grammar: "in itinerem" is wrong, because "iter - the way" has a neutral gender, therefor the accusative is also "iter". Also, I would have build the sencence differently: "to follow" has two additional informations: "whom?" and "when/ where/ where to"? First, "te sequor - I follow you" is correct. "in iter aureum" indicates the destination: "towards the golden way/ path". To say "iter aureum sequor - I follow the golden path" would be correct as well. But here, the author combines two accusative objects - this is what I doubt. I would prefer the ablative "in itinere aureo" to express the way/ method on which or with which he follows her.)
In general, this is a beautiful and fine written text and also a very sad and personal one. All I wanna say is: 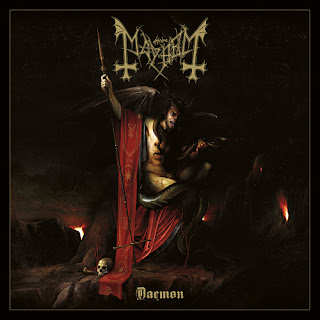 Well, there is a Norwegian black metal band called Mayhem. I guess some of you have already heard of them. They say that they are quite famous - don't know... Ok, Mayhem are bloody famous, but not for their Latin skills. They didn't much here in 2019 either.

The song title Agenda Ignis means The agenda of fire. 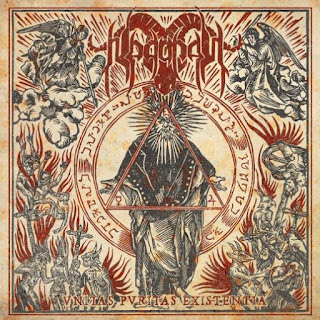 The German black Metal band "Negator" has recently released their newest record. The name of the record as well as some titles are in Latin, and there is also a whole song written in Latin - so there is some work to be done.

First, the titles:
And now the lyrics of the song "Ritus sex":

Did you find some latin in heavy metal music? Do you wanna know what it means? Do you think the name of your beloved band could be latin? - Send me an email and help me to enrich this page. Write to:
heavylatin (at) gmx (dot) net

Are you musician and right now afraid of my teacher-like red pencil (you shouldn't)? Do you want to use latin in your song? Feel free to contact me and I'm fond of giving you some humble piece of advice.